Mike was the webmaster of this site until his passing in September, 2009.
Enjoy his photo legacy - thousands of Train Pictures.

The site is maintained in his memory by his friend, Mark R. Magill with the blessings of his family.
Rolland Rodway's Railroad Graffiti web page CLICK HERE 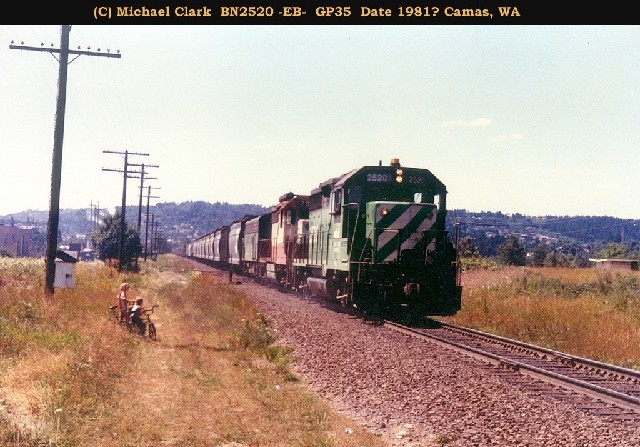 Mike wrote, "This photo was taken summer 1981. My grandmother's home was a half mile down and to the left of the tracks. X SP&S mainline. There is a scan of this old print, down in the BN files, but smaller. This is how we became life long train nuts: I roamed these tracks from 1958 to 1964. Went to stay with my Granny, as I could not stand my step father. He did make sure the bills were paid, and there was food on the table. So I moved back with my Granny, in Camas, WA. To this day I still miss her, 42 years later. She passed on in summer 1964." (Mike passed away himself in September, 2009)      Here's one of Mike's favorite stories  about how they got railroad standard gauge. RR Gauge There is another story about standard gauge track. Check out this link. Thanks Stephen Rees. More RR Gauge And while we're on the subject of stories, here's one about the Cantara Loop Guardrail.

Mike took  photos of trains for many years, and was very happy to have place to share them with every one. The photos on this site cover over 70+ years of trains and train service, and  most are from the 1950's to 2009.  The SP&S steam go back to the 1930's. This site is just a small part of the history of railroading in the great Northwest.

Mike wrote these words of thanks to those who helped build this site:

We have photos from other people mostly from the Rolland Rodway collection, and Jack Taylor collection. I have scanned over 800 photos of Rolland's and have put many of them on these pages. I would also like to thank Darrell Sawyer and Mark Magill for helping me get my web site started, and keeping it going . I would also like to thank Brian Ambrose for his great shot form the state of Washington." He was also thankful to Alex Stroshane of  Amtrack Prototype & Model for the animated train GIFS on this site, saying "He has a GIF for 98% of what Amtrack has run over the years, including freight trains, too."

(In memory of Michael Wayne Clark, who at the time of his passing lived in Portland, Oregon.)

Just click on the rail line's logo to go to our pictures of their equipment.

For those of you out there, that believe in a higher power, Mike invited everyone to check out this site. Higher Power

If you like rolling stock, this page is the place to go Northwest Rail Pixs

I was thinking making a new link page. But after look things over I think the best way to go is links to NMRA Directory of World Wide Rail Sites

NOTE: All images with the obvious exception of those owned by rail companies and other businesses on this web site are copyrighted by the estate of Michael W. Clark (except where noted) and may not be sold or used in commercial presentations of any kind except by purchase of the use of the image. For non-commercial use of my images (web sites, school, church or teaching use), please admin@railsnorthwest.com with your needs. You may download them freely for home or personal use.